This release is scheduled to go live on the evening of August 17, 2018 Pacific Time.

You can now select injections from the Sage Intacct UI instead of adding them manually. Creating Smart Events, Smart Rules, and Smartlinks just got a lot easier. For example, the following shows how to use the field lookup when writing a condition for a Smart Rule: 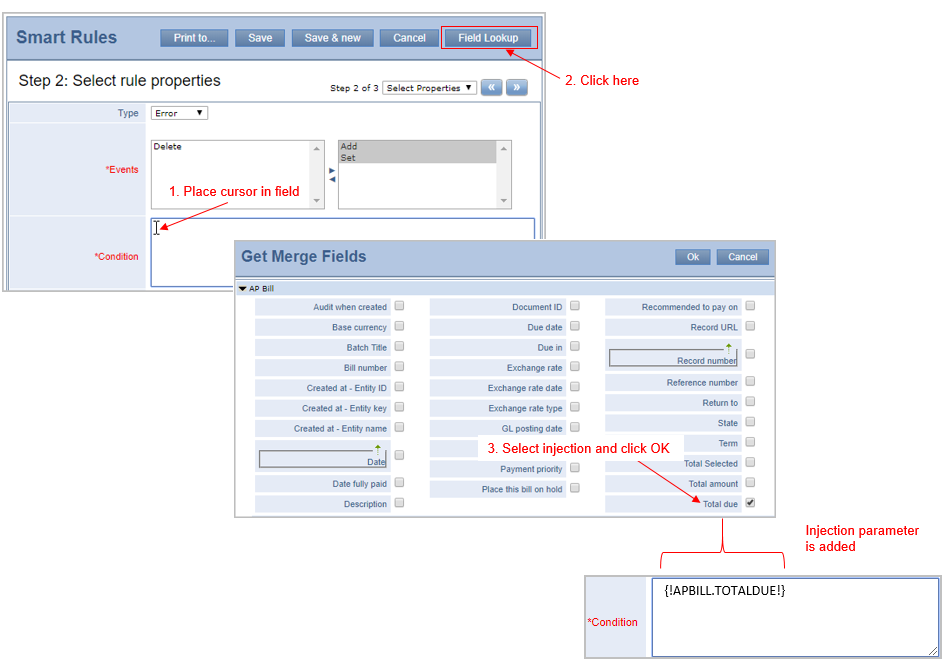 Note that the field lookup lets you access fields for related objects as well as any custom fields.

Version 1 of the Sage Intacct SDK for Node.js is now available. You can interact with the Web Services gateway using Node.js objects—you no longer need to work directly with the underlying XML API.

You can easily get started with the SDK, then use the reference documentation to go deeper.

Queue administration for offline jobs is now available in the API. You can list your offline job queue and offline job history. You can even take control of your queue and prioritize or cancel jobs if you have the right subscription (Premium Level of Service subscription at Silver level or higher).

An offline job refers to any sort of data action that you choose to process offline in the background while you continue working in Sage Intacct. Offline jobs might include CSV imports, reports, contract invoices, check runs, Data Delivery Service jobs, and more. (Smart Events are not currently supported.)

In previous releases, it was possible to delete a user who had been active in the system. In the current release, any user who has been active at least once cannot be deleted. This is needed to preserve the correlation between users and existing logs.

In addition, it is no longer possible to create inactive users.

In previous releases, an API call that generated a warning message in the system was blocked. Now such warnings will be ignored and the calls will go through.

For example, an API call that would result in a warning due to a future GL posting date will no longer fail and return the warning in the XML response. From now on, only true errors will prevent XML API calls, not warnings due to business logic or other factors.

You can now create MEA allocations using the API. You can also override system-calculated allocation amounts.

If you incorrectly or inadvertently canceled a contract line, you can use the new uncancel function to undo that action:

For more information about this feature, including default behaviors, see the RENEWALBILLINGTEMPLATENAME parameter on:

Update and delete other receipts

You can now update and delete other receipts using new legacy functions:

The dimensions API documentation has been enhanced to provide more usage information and examples.